Welcome to Luigi's Tastes of Italy

This blog is my small dedication to Italian cooking, and is abolutely 100% free of pretentiousness, complicated ingredients, or any effort to present Italian cuisine as anything other than it really is, very simple.

Hope you enjoy reading my posts and maybe trying out some of the recipes. 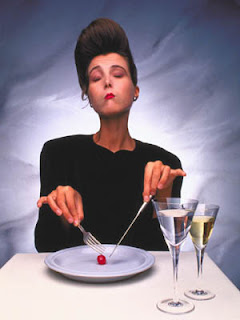 In general, I have nothing against pretentiousness, apart from it being hard to spell, and assuming that the right to be pretentious, has first been earned.

If I booked a table in any of the worlds top restaurants such as 'The Fat Duck', ' El Bulli',  'L'Astrance', or 'The French Laundry', I would quite justifiably, expect to see it, in full glorious well earned abundance.

However, when it comes to just talking about simple Italian food, or dining in just a regular Italian Restaurant, or watching a tv program on Italian food. I really question the tactic of confusing everyone with complicated menu's, or being over zealous with the use of un-translated text.  Let us also never mention the over complication of ingredients needed for what is essentially, just regular, everyday, or indeed even sometimes, peasant food.

It is infuriating, irritating, misleading, and plain unnessceary.

Italian meals other than special occasions, do not consist of elaborate multi course affairs.  Growing up, we only had these types of meals on Christmas Eve, Christmas day,  New Years eve, New Years day, Birthdays, and of course Easter. Most days of the week it was much the same, as the rest of the real world.

Namely a combination consisting of one, or rarely all, of the usual;
a starter,
a  main,
and a sweet.
I mean who in the real world sits down to a three or more course meal, every single night. Almost nobody, in fact probably nobody at all, i'd wager.

Even the famous Spaghetti Carbonara, whether you want to believe the romance, that it hailed from the revolutionary clandestine almost masonic organization, called the "Carbonari", or the rather more down to earth story of it being the most favored dish of the hard working Coal Mining community.  It really doesn't matter. We could even debate over whether guincale or pancetta, is the more authentic, and which provides for the better flavour.

However, what is certain in my mind, is that this dish was created by an average person to cheaply feed a family, not a recipe constructed by a chef.  And was almost certainly, lovingly made, using average everyday store cupboard ingredients no more, and no less.

Namely pasta, eggs, cheese, some kind of cured pork, and black pepper. What household doesn't have those ingredients to hand most of the time, few I bet.

This dish was never intended to appear fussy, or to use ingredients which are not easily sourced. It is just homely food, designed to feed a hungry family, on a budget. So if Mr James from London wants to use a smoked streaky bacon in lieu of pancetta or guincale, or Mrs Jones from New York wants to enrichen it with some cream, does it make it anymore, or any less of a Carbonara, absolutely not.

I personally think chefs, and the whole expectation placed on the so-called "fine dining" experience, has placed far too high expectations on the average home cook, the ingredients expected to be used, and what were once just basic cooking skills, have been romantisced into seemingly out of reach art.

Far from being pretentious, real food, and indeed real Italian food, is all about simplicity, fresh ingredients, and being where possible seasonal. Versatility was a trademark of the Italian cook, not being able to source some or all of the ingredients wouldn't stop a dish being made. Sure a pasta machine is a nice toy, but it is not anything hard work, and a rolling pin, could not equally achieve. My Nonna didn't have calloused hands for no reason.

Does feeling this way, make me any less, or any more of a foodie, I think not.  It does make me a realist though. Real good food, for real people is all i'm interested in. Rant over...
Posted by Luigi

So you are not going to judge me for using Vodka Sauce out of the Jar or Parm from a bottle????

As you know Italian food IS my favorite cuisine but I usually don't have all the fresh ingredients to make marinara etc so I just get a jar of it...don't judge lol.

This was my favorite sentence "My Nonna didn't have calloused hands for no reason."

Mari, jars with sauces I could forgive, but if you smother pasta with peanut butter and eat it out of a jar, I may judge, I couldn't promise not too. lol.

Preach on brother! *stands up and screams Amen* Great post. Enough with the fuss.

I couldn't agree with you more! Pasta, polenta and other dishes are best enjoyed in simple ways! Great post :D

Well said, Luigi. I feel the same way about Mexican food. Look forward to reading (and trying your recipes.)

I first started this blog in September 2009. As a place primarily to gather all my Italian recipes and to share my excitment and passion for Italian food.

I can be contacted at the below email address.

This is a list of blogs that I visit fairly frequently.

Why the Italian Cuisine is amongst the Best in the World!...

Italian food is amongst the easiest yet most rewarding of cuisines to prepare in the world.

With a little effort on choosing the best, and seasonal ingredients, truly excellent results are possible by anyone.

You don't have to be a chef, or particularly skilled, to enjoy great tasting classic Italian dishes.

Below is a selection of my Italian recipes in a print easy "recipe card" format...
Use back button to return!

Just place the mouse over the recipe and click.

Other recipes and thoughts...

A selection of my other blog posts, recipes and thoughts.